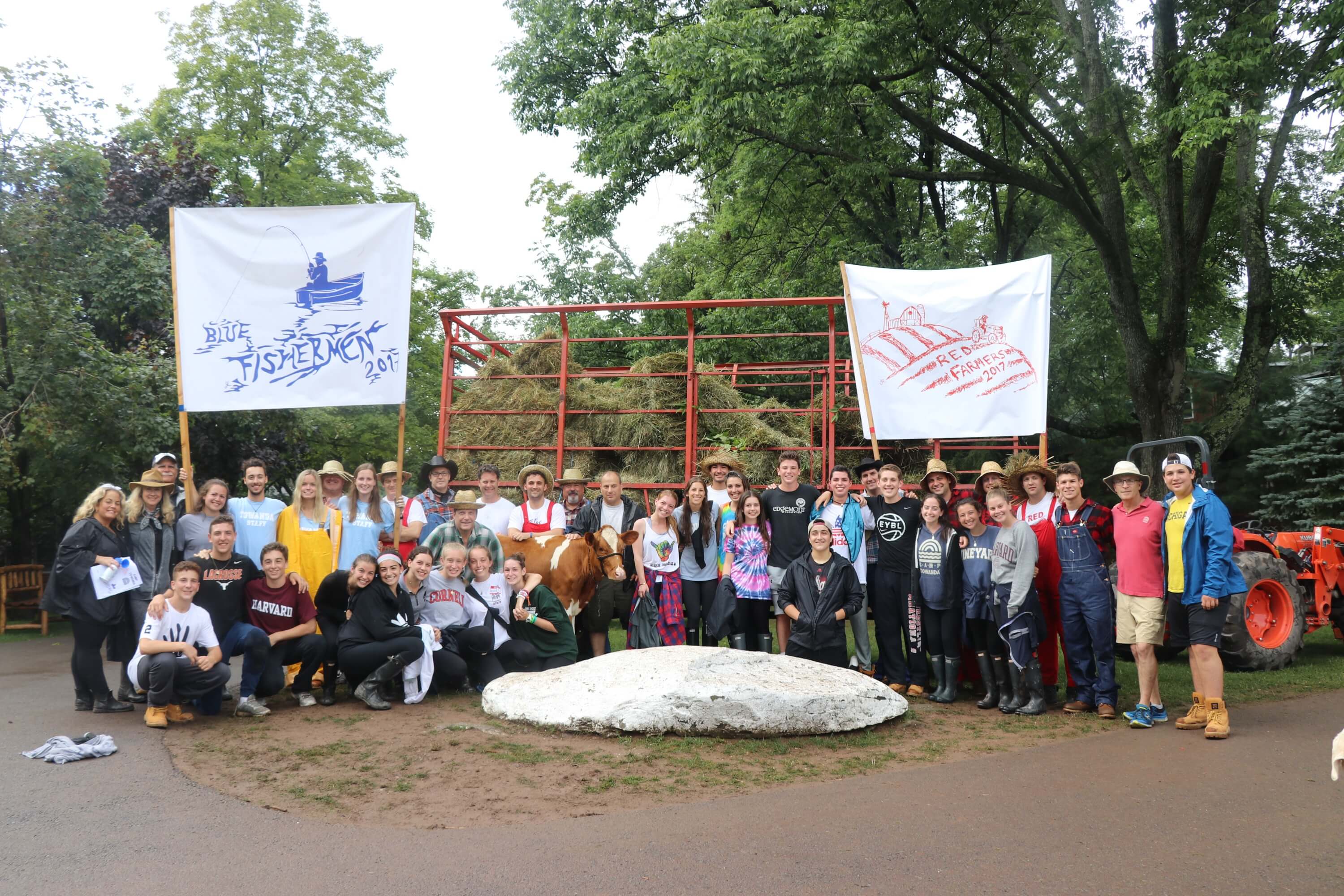 The day started out sunny, beautiful, a few white puffy clouds…things were cruising along nicely, even my shirt color seem to change with each passing cloud. Gorgeous.

A morning of activities and then as we entered the mess hall for lunch with a very loud American Pie playing, it started to thunder and rain; the tension was as thick as the humid air. After lunch we had a short lull in thunderstorm activity as everyone raced back to their bunks.  We decided to extend rest hour (good ol’ BUNK-O) as the rain and thunder resumed and kept on rolling.  Our plans for another all-camp general swim  seemed to become more and more unrealistic as the clock ticked by. In fact, it was pouring heavily and the thunder and lightning strikes increased.

Mitch and crew went from Plan A to Plan B to Plan C to Plan D and the finally at 4pm as the t-storms were safely away and the rain was just a drizzle we brought the whole camp back to the mess hall for all-camp bingo. The cards were distributed, the game began being called; the rain pounded again on the roof and the place was jammed. 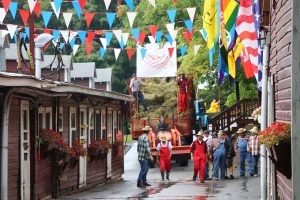 Over the loudspeaker came the sound of IS ANYBODY OUT THERE and all could see through the windows , coming through the alley where the delivery trucks usually drive… a mess of people dressed in overalls, flannel shirts, straw hats, bright yellow fishing waders….followed by a parade of a huge hay wagon, a cow leading the way and behind the hay wagon was a fishing boat following.  On top of the hay wagon were 2 farmers holding a banner, behind the fishing boat another banner.

Everyone raced out of the mess hall, ran around the flagpole through the courtyard and onto the basketball court; on the outside PA blasted IS ANYBODY OUT THERE… the cow, farmers, wagon and boat made its way to the white rock; fog horns blasted, and as the head Judgie Bob stood up high on the white rock, he declared this OLYMPICS 2017!!!!

As he said that, on cue….the clouds parted and believe you me…the sun beamed onto the entire area…despite that, we probably had over 3 inches of rain…it had finally stopped…and the crowd was in a frenzied state.   Yelling, screaming, hugging, crying, cheering and in just awe! 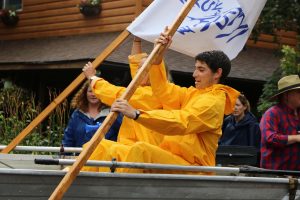 The cow moo-ed, the air horns blasted and the generals, camper captains, sergeants and lieutenants were called; the teams had meetings; we had an official Olympic flag presentation, we had a late dinner followed by the burning of the olympic rings ceremony, the coveted silent Olympic dinner (so much fun), Olympic taps, a few top level meetings and that was BREAKOUT.

Not as originally planned with a herd of cows coming down to general swim with the fishermen blasting horns from their boats…but exciting and still pretty cool…in fact perhaps better than planned. And credit to Jared for his planning!

The culmination of the psych outs, the fakeouts and all the talk and suspicion (including yesterday’s local FOX News Team doing a story on the economic impact of the Wayne County Camp Association on the region. It all added up to the start of this year’s Olympic Games.  Reveille will be at 7:45 AM; I will be on the Ghost Court the next 5 days and let the sportsmanship, camaraderie, support and fun begin!!! 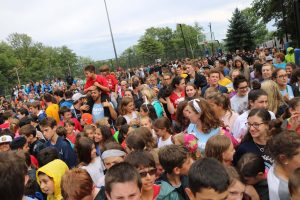 Just finished a meeting with the generals and spoke about this opportunity to experience management tools, control stamina, pro-active planning ,,analysis and evaluation…plus communication and creativity skills. I told the generals that this is an awesome experience where we want them and their staff to give it their all for this potentially amazing impact opportunity for co-counselors and campers. They loved it and we told them we will support  through varying methods (including subsidizing late night snacks so they don’t use their nites off other than to help the teams prepare for the next day’s activities). The generals realized that this was beyond camp, this was a crash course in true leadership…and the same applies to the older kids; whether Camper Captains or not, to rise and shine to their best personal best.

This is what Towanda is about. 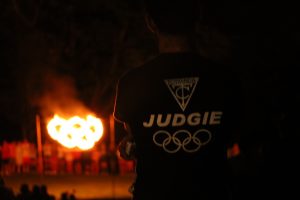 And as the generals plan their day, I shall retire to the mansion for the rest of the night (hopefully)…all else is really quiet.

One parent said to me today; thank you so much for taking the time to write, as the director of this ship, to us each night; I think I speak on behalf of many of the parents that we really appreciate it and know that this camp is like no other.

That means a lot; we do care and love sharing the insight. Thank you.

PS: anybody catch the breakout on the live camp cam???

*And I think I might need to buy a new bingo set for 800 (pieces were everywhere)! 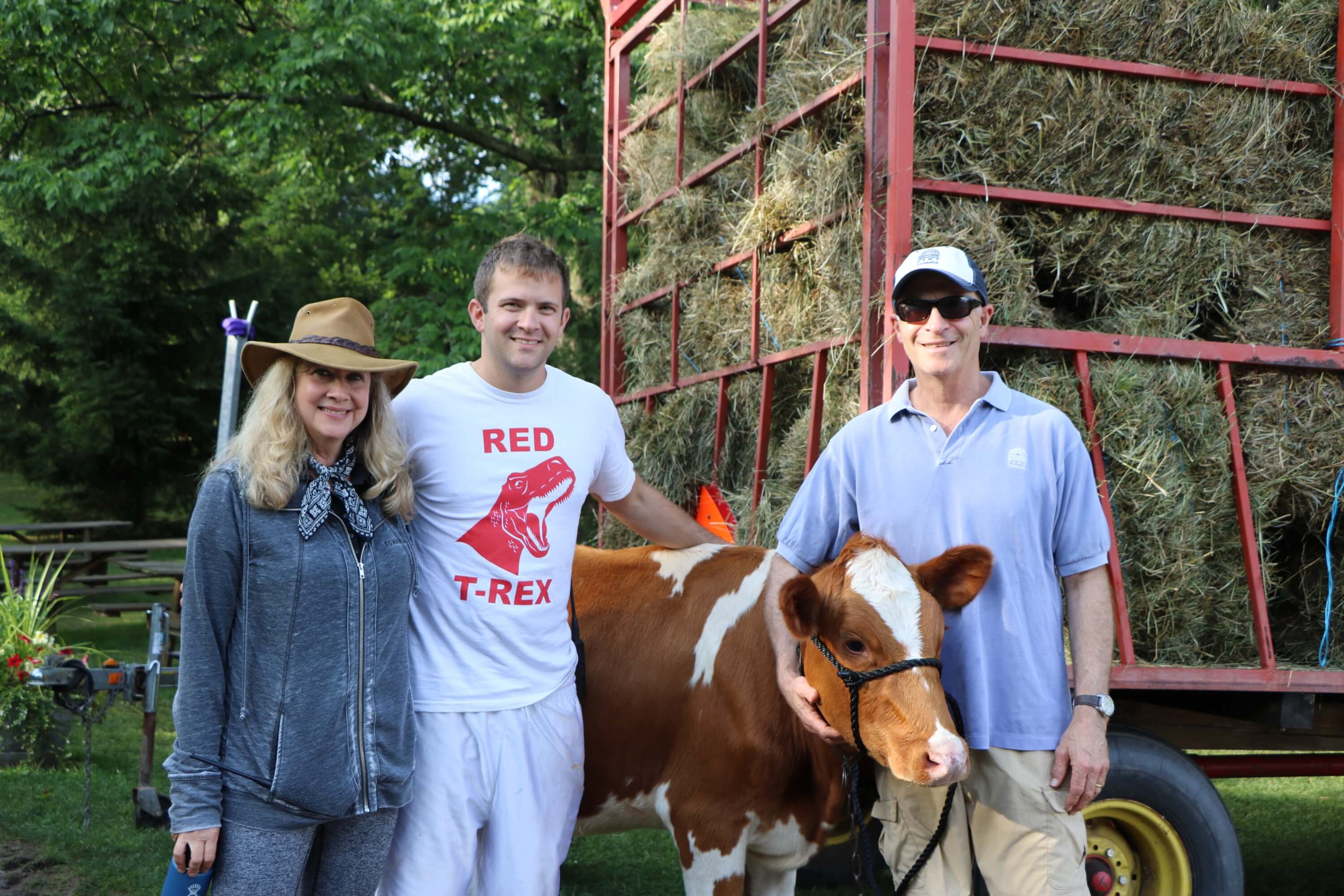 Camp Towanda is an independent, traditional, co-ed sleep-away camp in the Poconos in Pennsylvania. It is privately owned, operated and directed by Mitch and Stephanie Reiter (who are celebrating 28 years as owners and directors).  For 95 years, Camp Towanda has continued to define what camp should really be. Our program offers state-of-the-art facilities, an excellent and professional athletic department, waterfront, extensive arts, drama and adventure programs, and special events.  We are highly regarded and respected as an industry leader and are involved in giving back to various organizations throughout the year.  Camp Towanda is accredited by the American Camp Association and a member of the Camp-Alert-Network, Wayne County Camp Association, Camp Owners and Directors Association and the Pennsylvania Camp Association.